Dubai, UAE, 11 November 2020: Emirates Central Cooling Systems Corporation (Empower), the world’s largest district cooling services provider, has made a donation of AED 100,000 to Al Jalila Foundation, the Dubai based global philanthropic organisation to further its efforts to better people’s lives through a number of healthcare and research programs. The step underscores the social responsibility approach adopted by Empower in its philosophies and practices, which officially makes it as a the key donor of the ‘Bassmat Rashid Bin Saeed (the fingerprint of Rashid bin Saeed)’ giving campaign launched by Al Jalila Foundation. The campaign looks at donors, whether individuals or entities, as leaders of change in the UAE.

Ahmad bin Shafar, CEO of Empower, paid a visit to the Foundation and met Dr. Abdulkareem Sultan Al Olama, Chief Executive Officer of Al Jalila Foundation, and they toured the center’s facilities and the ‘Crystals of Hope’, a magnificent crystal installation featuring HH Sheikh Mohammed’s profile in appreciation of His Highness’ support for research and innovation in order to improve the level of health care and medical science in the country and the world. The installation also included the names of the founding donors for championing innovation and research. During the tour, Bin Shafar listened to a detailed explanation of the center’s research projects, and was briefed on the achievements of Al Jalila Foundation and the researches it supports. 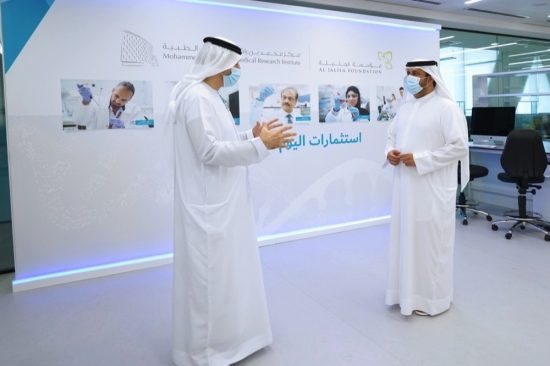 Al Jalila Foundation is one of the 33 foundations and initiatives under the umbrella of Mohammed bin Rashid Al Maktoum Global Initiatives. It was launched in 2013 with the aim of achieving leadership for Dubai and the United Arab Emirates in the field of medical innovations. It is a partner of Empower for the social activities and one of the dozens of medical institutions that benefit from the district cooling services provided by Empower in Dubai Healthcare City, where Al Jalila Foundation is located.

Dr. Abdulkareem Sultan Al Olama, Chief Executive Officer of Al Jalila Foundation, said: “As the UAE looks toward the next 50 years we are inspired by the great strides we, as a nation, are taking in medical innovation and the advancement of science and research. We are extremely grateful for the donation from Empower who, like us, believe that investing in medical research is critical to the longevity and sustainability of future generations. The world has changed significantly and as we go through this critical phase we are depending on science and philanthropy coming together to save lives and we proud to see Empower’s name on Bassmat Rashid Bin Saaed donor recognition wall.”

Bin Shafar expressed, “We extend our thanks and appreciation to all the medical staff, and we are all proud of the strong relationship that binds us with Al Jalila Foundation over the past year. We are proud for granting donations to finance part of the medical researches currently carried out on the Covid-19 pandemic and other issues.” He also pointed out that the late Sheikh Rashid’s wise leadership, insight and benevolent humane spirit has much contributed to the realization of many important developments that made of Dubai the modern city we have today. ’Bassmat Rashid Bin Saeed (the fingerprint of Rashid bin Saeed)’ comes to commemorate Sheikh Rashid and to chart the way for future pioneers who work on medical achievements that could save lives of millions.

It is noteworthy that Empower won the advanced version of the Dubai Chamber CSR Labels in recognition of the prominent role it plays with regards to adopting social responsibility initiatives and promoting best environmental practices that have positive impacts on society and the environment. This is particularly evident in the company’s strategy to train human resources and develop Emirati talents